As far as I can tell, here are the official particulars:

The deal is apparently being held up because the Reds "want to review Penny's medical records."

To break that deal down by team...

The Reds get Brad Penny and give up Luke Hudson and Ty Howington.

The Expos get Hudson, Blaine Neal, Adrian Gonzalez and Don Levinski and give up Bartolo Colon.

The Marlins get Colon and Howington and give up Penny, Neal, Gonzalez and Levinski.

It looks like it would be a deal that is pretty good for all 3 teams.

The Expos need to cut payroll and they are almost certainly going to deal Colon this off-season, so getting 3 young pitchers and a very good first base prospect is a pretty good haul.

The Reds get a young, established starter - albeit one with some injury problems - for 2 pitching prospects.

The Marlins acquire a #1 starter and a very good pitching prospect and give up a starter with some injury concerns and one of their better hitting prospects.

That said, I really don't understand the Marlins sometimes.

A couple days ago they were saying that they had reached their budget cap and they sold off one of their best players to Japan.

And now they are about to acquire Bartolo Colon and his big salary?

For purely on-field reasons, it's not a bad deal, but I don't understand it financially.

A 1-2-3 rotation of Colon, A.J. Burnett and Josh Beckett could be damn scary though.

It's too bad they got rid of Kevin Millar because if they could find a way to put together a decent offense to go with those pitchers, they could win quite a few games in 2003.

Of course, it's possible that this 3-way deal may never get done and it's also possible that, if it does get done, the Marlins will ship Colon somewhere else (Boston?) soon after they get him from the Expos.

ESPN.com is running "Hot Stove Heaters" for every team, starting with the Twins last week and ending with the Dodgers in the middle of February.

They are basically "state of the team" reports, mid-way through the off-season.

The actual content of the articles are pretty lacking, which is disappointing, but I read yesterday's "Heater" on the Cleveland Indians and, as Twins fan, it made me feel really good.

For what seems like my entire baseball-watching lifetime, the Cleveland Indians have been kicking ass and taking names in the AL Central.

Check out their projected lineup and pitching rotation (as decided by ESPN.com):

As a prospect nut, I really like a lot of Cleveland's prospects and I think they will be quite good in a few years.

But right now, that lineup looks awful and so does the rotation.

Milton Bradley is going to be a nice player - good center field defense and something along the lines of .270/.340/.440 at the plate.

Omar Vizquel is still a decent player, although his defense is slipping and his offense has never been great.

Matt Lawton is a former Twin with some injury problems, but he'll hit if healthy.

Ellis Burks will hit til he's 50 or his knees completely disintegrate.

Karim Garcia has a lot of power, but I wouldn't expect great things from him.

Travis Hafner is actually a favorite of mine and I think he has a shot at being one of the AL's best 1B.

Ricky Gutierrez is old with a lot of injury problems and he'll be one of the worst hitting 3B in the league.

Josh Bard is a good defender, but he can't hit and the same goes with John McDonald.

They also may end up with Brandon Phillips at 2B and they just signed Shane Spencer to play somewhere, but neither of those guys will do anything significant in 2003, although I do like Phillips' future potential.

That lineup will have trouble getting above-average production from more than 3 or 4 spots and McDonald and Bard have the potential to be complete black holes on offense.

The rotation looks even worse.

C.C. Sabathia has some potential, but his strike out rate dropped way down last year and I don't think he will ever be an upper-level starter.

Brian Anderson and Jason Bere will have trouble pitching 150 innings or keeping their ERAs below 5.00.

And Ricardo Rodriguez and Cliff Lee are very nice prospects, but extremely young and untested.

The Indians also went and made arguably their best pitcher, Danys Baez, into a closer, meaning instead of giving them 200 innings a year, he'll be good for about 60.

Basically, the AL Central is a 2-team race, which I guess I suspected all along.

Seeing what Cleveland is planning on putting out on the field in 2003 really drives that point home.

A lot of the Twins fans that I talk to seem extremely confident that the Twins will have a pretty easy time repeating as division champs in 2003.

It may just be me being pessimistic, but I don't see it being very easy at all.

Twins fans point to the injuries to Joe Mays, Eric Milton and Brad Radke and hypothesize that the team will be better because those 3 guys will be healthy.

The devil's advocate in me would say that Joe Mays isn't a very good bet to repeat his 2001 season, healthy or not, and counting on Rick Reed to pitch 190 innings with a sub-4.00 ERA in 2003 isn't the safest thing to do.

I am certain that as we come closer to opening day I will go into the AL Central race in a lot more depth.

At this point though, I would make the Twins the favorites, but not by nearly as much as most of the Twins Nation is expecting.

The good news for Minnesota and Chicago is that the other 3 teams in the AL Central have a chance at being truly awful and that might enable the 2nd place team in the division to compete for the Wild Card.

On the other hand, there are two teams in the AL East that look like 100-game winners to me, so that point may be moot. 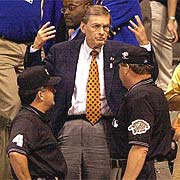 Bud Selig, one of my least favorite human beings and the same person that brought us inter-league play, tried to put an end to the Minnesota Twins and is still working on getting rid of the Expos, has a brand new brilliant idea: He wants to give homefield advantage in the World Series to the league that wins the All-Star game.

This is all because of how the All-Star game was botched last year, in no small part because of Mr. Selig.

Suffice it to say that I think his newest idea is a really bad one.

The All-Star game is becoming less and less important, but that doesn't mean we should go ahead and tack on to that problem by deciding which team gains a significant advantage in the World Series according to whether or not their league wins an exhibition game played in unique circumstances by players from 14 or 16 different teams, most of whom already know they won't be in the World Series by the time the All-Star break rolls around.

And guess what Bud? One of the main reasons why no one cares about the All-Star game anymore is because of your brilliant idea for inter-league play. Why should we think it is a big deal to see the best AL players play the best NL players when we have seen that for weeks at a time during each of the past several regular seasons?

I mean, we already have the idiotic 1-player-per-team rule in place.

Do we really want some guy from the Devil Rays and the best player on the Tigers going against the "All-Star" from the Brewers to determine whether or not the Yankees get homefield advantage over the Giants come October?

The All-Star game is a nice thing and every year for the week before and the week after the game, people get all excited about something related to it, whether it is a player that didn't make the team or a controversy with the actual game.

But guess what? Two weeks later, no one cares.

There is no reason to mess around with the most important event in all of baseball just because Bud Selig thinks the All-Star game should be more important.

If you want to make the players play harder and take the game more seriously, offer $100,000 bucks to each player on the winning team and zero to the losers.

You'd be surprised how hard millionaires will play for an extra hundred thousand and I bet the young guys on the team making close to the minumum might be willing to pull a Pete Rose and run over Mike Piazza or Jorge Posada for 100 grand.

But please Bud, don't f@#% with the World Series.

Over at "Mike's Baseball Rants," Mike (you know, the guy that rants?) is doing a really in-depth look at the history of relief pitchers.

Click here for his latest entry on the subject.