What the hell is wrong with Freddy Garcia?

Back in 2001, at the age of 25, Freddy Garcia went 18-6 with a 3.05 ERA for a Mariners team that went 116-46. He was selected to the American League All-Star team and finished 3rd in the AL Cy Young voting. It was a great season for a young pitcher and Garcia appeared ready to become one of the best pitchers in baseball.

Sometime shortly after last year's All-Star Game however, it all fell apart. Garcia pitched 95.1 post All-Star break innings last season with a 5.66 ERA and, after getting shelled for 7 runs in 1.2 innings on Friday against the White Sox, he has a 5.57 ERA in 137.1 innings so far this season.

Take a look his combined numbers from the start of that great 2001 season through the 2002 All-Star break, compared to his numbers since:

Garcia has been a completely different pitcher since that All-Star Game (a game in which he pitched 2 scoreless innings and would have been in line for a decision, had the game actually had a winner). It's not some little slump either, he's been bad over the course of his last 38 starts, which is more than a full-season's worth.

Garcia actually started this season pitching relatively "okay." Through June, he had made 17 starts and had a 4.12 ERA in 109 innings, including 5-0 with a 2.05 ERA in 5 June starts. Since then, he has compiled the following numbers (if there are children nearby, you may want to cover their eyes):

It's gotten so bad that not only did the Mariners try to trade a 27 year old pitcher who was their "ace" as recently as last season, they weren't even able to find any teams interested enough in Garcia to pull the trigger on a deal

So, it's obvious Garcia has been significant worse since the 2002 All-Star Game. His ERA is over 2 full runs higher and he's getting absolutely lit up recently. Let's look a little closer though, and see how and why he is pitching so much worse:

Quite simply, he's been worse across-the-board. His strikeouts per 9 innings are down 6%, his walks are up 38% and he has given up 72% more homers.

The 6% drop in strikeouts may not seem like much, and it really isn't, but it's becoming more of an issue recently, with Garcia's strikeout rate this season down to 5.83 per 9 IP. Still, the lack of strikeouts is not Garcia's biggest problem. He is walking almost one more batter per 9 innings and, most significantly, has served up nearly twice as many homers.

The amazing thing about his sudden inability to keep the ball in the ballpark is that he does half of his pitching in Safeco Field, which is one of the toughest parks in baseball to hit a homer in. Last season, Safeco decreased home runs by right-handed batters by 25% compared to a "neutral" park and it decreased homers by left-handed batters by 11%. Still, Garcia has allowed 13 homers in 70.2 innings at home this season (1.65/9 IP), which is a higher rate than he has allowed on the road (1.35/9 IP).

After his most recent disastrous outing, talk surfaced from the Mariners' coaching-staff that they discovered Garcia has recently been "tipping his pitches." This is a common "excuse" given when a previously good pitcher suddenly experiences bouts of ineffectiveness. It's a pretty smart move for a pitching coach to use, because it is basically saying to a pitcher who is struggling that there is absolutely nothing wrong with his ability and performance, but that something other than his actual pitching was causing the struggles. While it is certainly possible that tipping pitches is Garcia's problem of late, I don't buy it for two big reasons:

1) I heard the exact same thing about him last season. I don't remember exactly when and I don't have the exact quotes to back it up, but I am 100% sure I heard talk about Seattle's coaches discovering Garcia was tipping his pitches at some point last season. If I remember correctly, Garcia had a very good start almost immediately after the talk of him tipping his pitches came out and everyone took that to mean that the problem had been discovered and a cure found. Of course, when he went back to stinking the next start, all that stuff quieted down quite a bit.

2) This isn't some month-long slump in the middle of hundreds of good innings, where the possibility of someone tipping pitches might be a good explanation for the struggles. This is more than an entire season's worth of sub par pitching, stretching over the course of 38 starts and 233 innings pitched. If he is tipping pitches, it's pretty obvious it is not something he has just recently started doing. And, if he has been doing it for the entire time, what the heck took the coaches 38 starts to notice it and attempt to correct it?

While Garcia has certainly done enough to hurt his performance this season by himself, it also appears as though he is getting the short end of the defensive stick. As a team, the Mariners have the 2nd-best defense in all of baseball at turning "balls in play" into outs. So far this year, they have converted 73.36% of BIPs into outs (or they have allowed a hit on 26.64% of BIPs).

By my quick-and-dirty calculations, Garcia has allowed a hit on 28.93% of his BIPs, meaning the defense has converted BIPs into outs 71.07% of the time with him on the mound. That's a significant drop-off from the team-wide percentage. While 73.36% ranks the Mariners 2nd in baseball, Garcia's 71.07% would rank him 17th in MLB. The 17th-best defensive support isn't exactly horrible, but I think it's worth noting that he seems to be getting less help from his defense than the rest of Seattle's pitching staff.

Another interesting thing about Garcia's season is that, when he has actually pitched well, the quality of his opponents has not been very high. He has 12 "quality starts" all year and they have come against the following teams:

Of those 11 teams, only 4 of them (Rangers, Royals, Braves, Orioles) are in the top half of baseball in runs scored and four of them (Tigers, Indians, Padres, Mets) are among the bottom 5 scoring teams.

From the looks of things, Garcia has not faced particularly good offensive competition this year, as he has yet to pitch against Boston or Toronto - the top 2 scoring teams in the AL. Against the other 3 teams among the top 5 in the AL in runs scored (top 6 actually, since the Mariners are 4th), he has a 30.38 ERA against the Yankees, a 6.94 ERA against the Rangers and a 7.11 ERA against the Royals.

To be honest, I have no idea what is wrong with Freddy Garcia. What I do know is that, if it is a matter of him tipping his pitches, he has been doing it for over a year now, which makes the Mariners' coaching-staff the worst in the history of sports. If he has some sort of an injury, it appears as though it happened sometime around last season's All-Star break and I guess it's possible it has been getting gradually worse this entire time, and has reached a boiling point with his most recent and most woeful performances over his last 6 starts or so. Whatever it is, I think the problem is more complex than simply saying you've found a quick-fix like "tipping pitches."

I think Seattle pitching coach Bryan Price wrapped up the whole situation in one quote:

If the Mariners should decide to demote Garcia to the bullpen (or the minors) at some point, they have a Johan Santana-type phenom waiting in the bullpen. Rafael Soriano, a 23 year old right-hander whom I ranked as the 8th-best pitching prospect in all of baseball prior to this season, currently sports the following numbers since being called up to the Mariners:

That's the type of pitching line that makes even Johan blush. It's definitely decision time in the Emerald City. 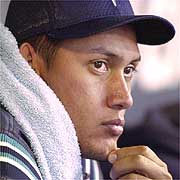