• Being a millionaire doesn't mean what it used to, or so all the millionaires say.

• Summer Anne Burton is drawing all 295 baseball Hall of Famers and her work is pretty cool.

• Jeff Van Gundy is my favorite NBA announcer, but this is still pretty scary.

• Congratulations to my main man Darren Wolfson for becoming a father Saturday. I predict they'll have a father-and-son television or radio show before the kid is out of kindergarten.

• Call me crazy, but I vote for Padma Lakshmi doing more "Top Chef" episodes in a bikini.

• Bryce Harper's minor-league at-bats will have a sponsor.

• After five years as the Twins beat writer for MLB.com Kelly Thesier has left the job for a new gig as a communications manager with the LPGA. I was (too) tough on Thesier when she first started at MLB.com, but her improvement over the years was remarkable and she always took my criticisms in stride, or at least managed to act very friendly the few times we met in person. Best of luck to Kelly in the golf world and thanks for five years of Twins coverage.

Thesier's replacement is Rhett Bollinger, who's been helping to cover the Angels and Dodgers for MLB.com since graduating from USC in 2008. I don't know much about him beyond that, but I definitely recognize his name from various MLB.com bylines over the years. Actually, that isn't entirely true. I can also confirm that Bollinger has exceptional taste in bloggers and/or is smart enough to suck up to the jerk who was often critical of the person he's replacing.

• I'm sad to note that Nate Dogg passed away at age 41. His mid-90s peak coincided perfectly with my getting into music and after my dad got me a CD player boombox for my 11th birthday "Regulate ... G Funk Era" was one of my first purchases. Seventeen years later I still have all the words to "Regulate" memorized and marvel at Nate Dogg's ability to turn the phrase "and it's going real swell" into a viable rap lyric. Hopefully his next stop is the East Side Motel.

• Terry Ryan and Bill Smith may provide some insight into why only three current MLB general managers are former MLB players.

• For years Jon Krawczynski has been the most underrated sports writer in Minnesota while covering the Twins, Timberwolves, Vikings, and seemingly every other local team in the relative obscurity that comes with being part of the Associated Press content machine. Now he's finally getting some attention, but unfortunately it's because NBA referee Bill Spooner filed a lawsuit against Krawczynski for this January 24 post on Twitter: 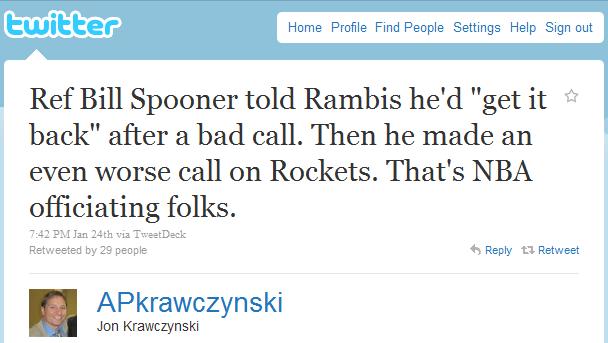 No one will ever confuse me for a lawyer, but I can't imagine how someone could win a lawsuit over that. How does Spooner prove he didn't say that, let alone prove damages and whatever else is required to win the case? Beyond that, by suing Spooner has ensured that thousands and thousands of people read Krawczynski's original tweet, which was initially seen by at most his 2,000 followers and was only re-tweeted a dozen times before the lawsuit news broke.

• Speaking of the Associated Press, they'll now be asking Krawczynski and other MLB writers to pen "hometown" versions of game recaps in addition to standard stories so local newspapers not staffing games with their own writers can better use the content. That helps newsrooms that have suffered through big staff cuts, but it'll also lead to even more cookie-cutters recaps. Or as AP sports editor Terry Taylor said: "They were more concerned with just getting it fast."

• Everything you ever wanted to know and more about Adrian Beltre and head rubbing.

• My latest podcast discovery is "The Best Show On WFMU" hosted by Tom Scharpling, who is somehow consistently entertaining and funny while doing a three-hour show with zero breaks. He rants about various topics, takes calls from an odd and amusing cast of regulars, breaks in and out of an ultra-sarcastic persona, often has big-name guests from the comedy and music worlds, and sprinkles in fake guests played brilliantly by Superchunk drummer Jon Wurster.

"The Best Show" is truly unlike anything I've ever listened to before and I'd probably classify it as an acquired taste because of the quirkiness and many inside joke-like aspects, but I've very quickly burned through two years of the decade-long archive and am convinced Scharpling is a genius. Along with hosting my new favorite podcast, he was a "Monk" writer/producer, wrote NBA articles for Slam magazine, and is doing a new television series with Paul F. Tompkins.

• In a rare trip to the movie theater I saw "The Adjustment Bureau" last week. I'm a sucker for that type of science fiction plot and the overall conceit of the movie was very intriguing, but the actual execution was disappointing, especially in the final half-hour or so. Despite some solid performances from Matt Damon, Emily Blunt, John Slattery, and especially Anthony Mackie it left me feeling like Philip K. Dick's story had been wasted. Grade: C-plus.

• Jim Nantz may be CBS' lead announcer, but for me there's no question that Gus Johnson is the true voice of the NCAA tournament and Greg Bishop of the New York Times penned a very good profile of the undisputed king of exciting calls.

• Also in the New York Times this week, Grant Hill wrote an excellent response to Jalen Rose regarding the portrayal of Duke players in ESPN's new Rose-produced "Fab Five" documentary. Hill's entire piece is really good, but the last line is spectacular.

• I'll be rooting for Tim Collins this season, at least whenever he's not facing the Twins.

• I don't watch many network television shows at this point, but four of the spots on my DVR are filled with Thursday night NBC comedies and I'm thrilled that "Community" and "Parks and Recreation" have both been renewed for next season along with "30 Rock" and "The Office."

• Tim Lincecum spent the offseason trying to put on weight and revealed his methods, which led to a whole bunch of baseball scribes writing articles about how he often got three double-doubles, two orders of fries, and a half-chocolate/half-strawberry shake from In-N-Out. I guess that's a lot of food for someone listed at 165 pounds to put down, but as a longtime fatboy it hardly seems worthy of such shocked coverage. On a related note, I've started another diet.

• I'm writing some lengthy season preview articles over at Hardball Talk, including this one on the AL Central's worst team and this one on J.J. Hardy's new team. Check 'em out, please.